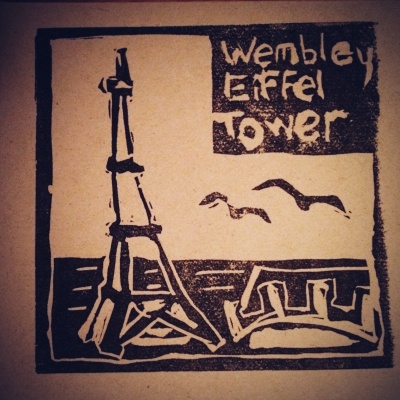 Composed on a modular synthesizer, constrained by the length of the available tape for processing, this release from Darren Hayman is an elegaic paen to the work of Sir Edward Watkin, and his Wembley Eiffel Tower.

The album was recorded on a modular synthesizer, in six uninterrupted takes, the length being driven by the length of the tape it was recorded onto. Through selection of modules, including use of a clock divider and pattern generator, the modular synthesizer was configured then set free to select the notes played – there was no human intervention in the selection of notes. Through the vagaries of the tape mechanism and the random voltages of the synthesizer, new rhythms and arrangements were captured with each pass. There are six tracks of music and one vocal. The reverb was provided by an EMR:11 unit made by Electro Mechanical Research and the echo itself was also recorded onto tape. released 12 may 2014

Monolith Cocktail: “…the barely-there synths undulating against each other in a genuinely spectral way… Darren Hayman captures the spirit of true, lofty grace, as he delivers a real ghost story to the willing.”

Clicky Clicky: “The result is a peaceful but mildly sinister meditation that recalls the soundtracks of certain British television programming …”

Norman Records: “There’s something strangely reassuring about it, like a pilotless vessel gliding through space.” (8/10)

Physical editions of Marine Life by @rupertlally Lally now all gone... thanks to everyone who supported this wonderful recording